Hoops Clash is one of the last projects I worked on at Backflip Studios. It is a title we were publishing along with the wonderful YesGnome development team in India. Although we were the publishers, we worked really closely with YesGnome, allowing for a long of visual design work to happen at Backflip studios. I was the Lead Artist in-house on this project, working closely with Joey Julian on UI art and Jaime Fraina on UX design. Together, along with production help from YesGnome's artists, we flipped the visual look and tone of this game in about three months time.
With it's tone rooted in American Street Basketball and Hip Hop Culture, this was a very fun project for me to oversee visually.

Here are a few select pieces from the vast array of work we completed for Hoops Clash!

LOGO DESIGN
We got rebrand Hoops Clash from the ground up. The final game logo, shown below, with done my an outsourced design house who worked with Backflip's marketing team. The logo was art directed by me and uses elements created completely by myself and Joey in-house. Final polish was also taken on by me. 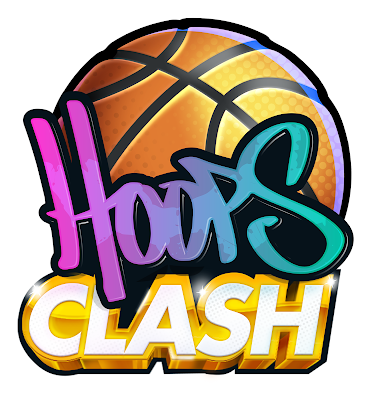 Below are the very first exploration sketches I did for the Hoop Clash logo. I knew from the start that I wanted to blend a graffiti hand style with bold gold lettering to marry street and premium feel to the style.

Below is the first concept edition created by Joey based on feedback sessions from the above sketches. 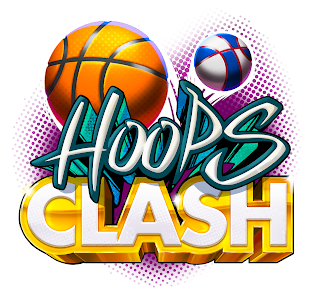 BASKETBALL DESIGN
Of course, central to a basketball game would be basketballs. I built a style for the basketballs that consisted of templated Photoshop files for ease of construction, color and texture changes. Hundreds of basketballs were created and explored. The examples below show the set the game was to launch with.

SNEAKER BOX DESIGN
Hoops Clash features a gacha style reward system for the player. Instead of using treasure boxes, we decided to use sneaker boxes as they make sense with basketball and street culture. The boxes in game are fully rendered and animated assets. I got to do all of the concept design and texture work for the sneaker boxes. One of my favorite parts of the game! 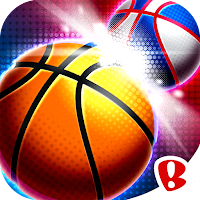 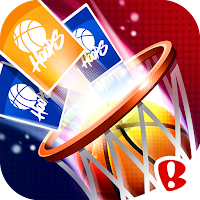 UX/UI Design & Art Direction
The look and flow of the UX/UI was a huge team effort! Under my art direction, Jaime designed and revised all of the UX flow for the game in wireframes and interactive examples. Working right along side Jaime, Joey designed a beautiful visual style for the UI that fit the mood and aesthetic we were shooting for in Hoops Clash. The UX/UI was built smart so as to be expandable and re-usable in as many was as possible - especially in foundational pieces like using nine-slicing for border and box creation and a universal skew for alignment throughout. 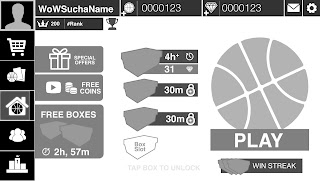 An example of Jaime's wireframe work, over which Joey was able to visually design. 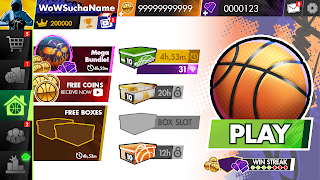 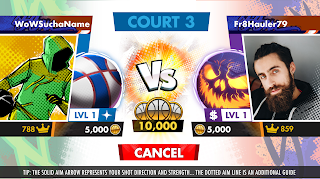 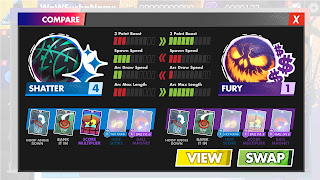 COURT DESIGNS
Hoops Clash in-game courts are essentially flat backdrop paintings and I took great pleasure in designing a handful of these myself, as well as creating a best practices art style guide just for the courts so that the artists at YesGnome would be able to match the unique graphic painted style. Below are a few examples of some of my favorite courts.